On the 3rd of July the Softcat Senior Leadership Team took on the 3 Peaks Challenge in support of the mental health charity MIND. Here is our CIO, Rob Parkinson’s, recount of the challenge.

If I had a pound for every time someone asked me how I was feeling in the week following the 3 Peaks Challenge I would have maybe six or seven quid.  So, I’m not going to be rich, but the answer I gave universally was I felt good physically and, more importantly, it a was an amazing experience. Not an experience I would ever want to do again you understand, but on reflection as I write this some days after the event, it’s an experience I’m increasingly remembering with fond memories. This is my version of events; the highs (literally), lows and hopefully some of the funnier moments along the way.

We agreed to do the 3 Peaks Challenge a long time ago, in those heady pre-pandemic days, when with much bravado we decided on the most difficult of several options banded around.  And what a challenge it is; attempting the ascent and descent of the highest peaks in Scotland, England and Wales in less than 24 hours. The walking distance alone is around 24 miles, add to that vertical climbing of over 3,000 metres and lastly not forgetting the small matter of the 480 miles of driving between the 3 peaks.

We arrived in Fort William the night before the challenge, the next morning we piled onto the minibus for the short drive to the foot of Ben Nevis and where it would all begin. As we stood there in the warm early morning sunshine we could see the upper part of the mountain under cloud cover and all the early risers on the mountain trail, soon we knew it was time for us to join them.  At 8am, and after the obligatory photos, we started up the mountain path.  Ben Nevis really lets you know you’re not just out for a morning stroll right from the very beginning.  The lower slope man made path rears up steeply and within 20 mins we were already stopping to strip away unwanted layers of clothing.

After hours of steady and solid climbing the group reached the cloud covered summit plateau and we made our way to the official trig point summit markers for photos.  Whilst it’s not exactly a difficult climb it still takes some doing so and I was more than a little surprised to see quite so many people on the top, there were probably somewhere in the region of 50-80 others like us at the top of Scotland!

I won’t spend lots of time going into details of the descent. Apart from to say it is much harder on the joints than the ascent.  I know I sound like an old man but to borrow a soundbite from Wattie “next time I do the 3 peaks make sure I take them on at a younger age”.  It was the knees for me, not surprising as you’re putting significantly more pressure on them than when you’re climbing upwards.  I was also amazed by the sheer number of people we passed on the way down, it was really, really busy up there.

One mountain down and we were all in reasonably good nick with no major injuries and best of all no blisters.  Now what could be more fun than a 7-hour drive in a minibus? I’ll tell what, almost anything!  I said at the start I recall fond memories and on the whole this is true, but this is heavily influenced by the walking and the camaraderie.  The minibus journeys on the other hand were a painful experience, uncomfortable and something to forget.  In 2004, I was lucky enough to spend 5 months travelling around South America, we caught lots of buses and minibuses to get around often over very long distances.  I recall freezing on a bus with broken window high in the Bolivian Andes and another 6-hour journey on a bus with chickens and a live goat in Peru.  The point is these journeys were uncomfortable and even somewhat unpleasant, but they were far better than our minibus on the 3 peaks!

To start with there was our driver, who for the purpose of this blog we’ll call Karl (not his real name).  Karl didn’t seem very well suited to his job. For a start with he seemed to have fundamental dislike of people being in his minibus, which is an occupational hazard for someone who drives a minibus.  He definitely didn’t like us having our big bags in the back, these were for confinement in the trailer and under no circumstances should they be placed in the overhead storage.  No, that was reserved for child booster seats (spoiler alert: not something we needed on this trip).  The final straw for Karl was the banana skin that someone left on the bus.  This led to a telling off as we were told “you can’t leave banana skins lying around with COVID and all that…”. 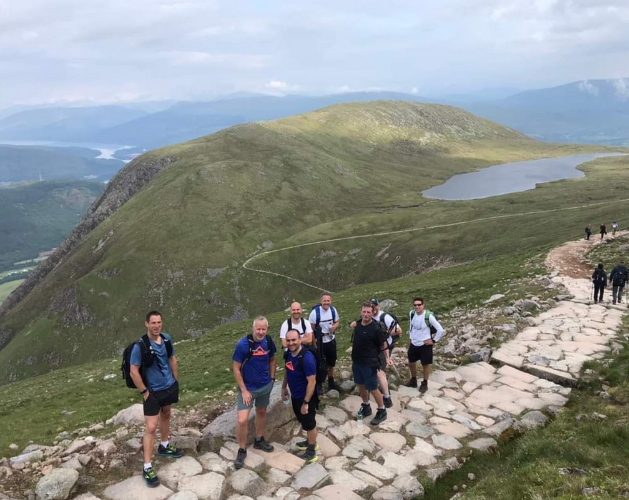 We arrived at Scafell Pike at 9pm ready to go and set off almost immediately up the mountain.  It was still relatively light but with a 4-hour trek ahead of us we had headtorches and waterproofs ready to go in our backpacks.  The lower slopes are a gentle incline, firstly through a meadow but making our way onto the well-trodden route climbing steadily next to a stream flowing down the mountainside.  We listened to the 2nd half of the England vs Ukraine Euros match, our spirits lifted every time England scored, 3 in quick succession putting a spring in our step.

We were fast rising up the steep valleys sides when without warning the skies opened and it rained.  The rain was the most torrential I’ve ever seen in the UK, it was like being caught in a monsoon in the sub-continent.  We all struggled into our waterproofs as quickly as we could. Putting on waterproofs in the dry takes time, when you’re in the middle of a rainstorm and rushing to stay as dry as possible it seems to take forever.  It had turned very dark very quickly, and then the thunder and electrical storm rolled in.  At this point our guide told us that we couldn’t carry on and we had to turn around and go down the mountain as it was just too dangerous.  He didn’t meet any resistance and we turned to head down what was going to be a very slippery and dangerous path next to the stream that had transformed into a gushing river.

We left Scafell just before midnight, in dry clothes but still feeling wet to the bone and fairly annoyed that we hadn’t made it to the top.  We reckoned we were two thirds of the way up when we had to turn around and calculated we would have needed another 2 hours to reach the top.

The next 5 ½ hours count as some of the most miserable hours I’ve endured in a very long time. It’s worth remembering I had the misfortune of having to watch Leeds United play in Division 1, miserable times indeed!

As the darkness was slowly replaced by a grey dawn, we finally arrived at the Pen y Pass carpark, the starting point for the Pyg track route we were following to the summit of Snowdon.  Unlike both Ben Nevis and Scafell Pike the car park was almost deserted. It was raining again; the torrential rain of Scafell had been replaced with a constant heavy drizzle that would accompany us all the way up and for a decent chunk of the decent.

I enjoyed climbing Snowdon the most, it’s more challenging and rugged than the others as you clamber over stones and ridges.  That being said, at that point it had become a battle of attrition: us against the mountain and time.  Our bodies were weary, heavy with the energy sapping climbs of Ben Nevis and Scafell Pike, coupled with the lack of sleep thanks to our uncomfortable transport.  It was much quieter in the group, less chatter and banter as we arduously plodded up the mountain.  We weren’t slow, we moved at a decent pace but it felt somehow slower, a combination of the weather, the early start and the lack of other walkers.

We did however have one constant on each mountain, Wattie would befall some mishap. It started with him hitting the wall on the descent of Ben Nevis as he ran out of energy and looked like Bambi on ice.  On Scafell Pike there was the wardrobe malfunction where the sole of his boot fell off (his boots looked like they had come from around the time Hilary and Tenzing conquered Everest so it was probably about time for a new pair!), and now about three quarters of the way up Snowdon he strained a calf muscle. Every few yards he would then need to stretch it out to ease the pain. Typically, we had just reached the point where the steps got that little bit larger and a slightly more difficult.  But just as he does, Wattie soldiered on regardless, determined to the make it to the top and not to slow the group down.  I know seeing that gave me a little energy boost, we pushed onwards, making it onto the summit ridge and the final few hundred yards running alongside the famous Snowdon mountain railway.

We posed for one final photo at the summit trig point, and we were done.

We talk a lot about culture at Softcat and how we are rightly proud of our culture, why it’s unique and a differentiator to our business, but what comes after culture? The 3 peaks idea started as a team building exercise, we wanted to demonstrate our culture, unity and togetherness as a leadership team.  As I reflect on the events of that weekend though I don’t think about team building, I think about spending time with my friends and overcoming a challenge with people I wanted to be with. Of course, we don’t all have the same views and that’s a good thing but this without a shadow of a doubt is the best team I have ever worked with.  I’m looking forward to future team building exercises, although next time a country house hotel, a spa, an infinity pool or a golf course wouldn’t go amiss!

So, what comes after culture, well for me it’s friendship. I am proud and honoured to have completed the challenge with my friends. Thank you Ant Cowen, Colin Brown, Graeme Watt, Graham Charlton, James Baker, Richard Lecoutre and Richard Wyn-Griffith for being great friends and companions on this adventure.