The way we work has become more fluid and flexible. Today, 2.3 million people in the UK work from home for at least half of the week, and 59% of organisations now have a ‘bring your own device’ policy.

Pre-pandemic, it was estimated 24% of enterprise mobile endpoints were exposed to device threats. And this number is only going up. In April, Microsoft UK held a partner online seminar dubbed “Windows Powers the Future of Hybrid Work”, unveiling Windows 11 and Windows 365. In this post, we will investigate why Windows 11 has been unveiled and how you can use Windows 11 and Windows 365 to power the future of your hybrid work.

Windows 11 is an Operating System upgrade that feels like a reskinned Windows 10 with enhanced functionality, stronger accessibility, and refined features.

Despite the usual benefits of a new OS (Operating System), one of the reasons for Windows 11’s creation is security. Windows 11 requires Trusted Platform Module (TPM) 2.0, a physical processor designed to authenticate the PC you are using.

While this is one of the most discussed system requirements, TPM 2.0 on Windows 11 makes it easier for the OS to perform hardware-based encryption. This means it is much harder for malware and viruses to affect your hardware and boot-process.

The good news is a corporate device has a typical lifecycle of 3-5 years and devices no older than 2017 should be compatible with Windows 11.

Windows 11 has been intuitively designed so the user can find documents, apps, and settings in less clicks than Windows 10. For example, accessibility features are actionable from the taskbar and features such as Live Captions have been baked into Microsoft’s machine learning in Windows 11.

For users with a requirement for accessibility features, Windows 11 simplifies the process through applying one setting to work naturally across your apps.

A second major unveiling is Windows 11 Cloud Configuration for Endpoint Management, which makes up another part of Microsoft’s future working vision.

For admins via Microsoft Endpoint Manager, Windows 11 can deliver messages directly to people on their corporate PCs. If your organisation would like to surface important training to your whole organisation, you can push a message out to individuals via their Windows endpoint, with a call to action.

Additionally, through Microsoft 365 integrations, secure and permissions-based connections can be made for Helpdesk admins to support their users with Remote Help. Using Microsoft Teams, if you require internal remote IT support, a helpdesk admin can take control of your PC to rectify the problem. Microsoft are using Windows 11 to pivot their vision of the PC as the new office.

A third feature works across your Windows and Microsoft 365 ecosystem – Windows Autopatch (not to be confused with Windows Autopilot).

Windows Autopatch is a service that optimises Windows and Office update deployments, ensuring you are kept up to date. Windows Autopatch provides a proactive service to mitigate interruptions, with a progressive deployment rollout which is efficient with halt and rollback support. It also enables organisations to define Ring-based deployment workflows, to balance speed and safety when installing updates. 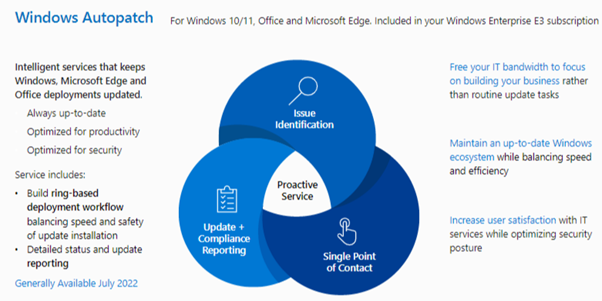 Next up is Windows 365. Whilst this offering from Microsoft has not yet made the expected waves, it is growing. Windows 365 is a scalable cloud PC running Windows 10/11, streaming on any device, hosted in the cloud.

Windows 365 Enterprise gives organisations the ability to manage Windows 365 cloud PCs alongside their physical devices. There are many use cases for Windows 365. For example, Windows 365 encourages contractors to bring their own devices to a business, where their corporate computer is provisioned to them in the form of a cloud PC.

The cloud PC is managed by Intune and with Microsoft 365 Groups, can have all the correct policies applied to a user. Windows 365 is an enabler of flexibility. Soon, with direct integration with Windows 11, users will be able to flip from their devices’ desktop to their Windows 365 cloud PC, from the taskbar.

This closer integration is the same approach we have seen with the inclusion of Microsoft Teams in Windows 11. Hopefully, we will see more users discover Windows 365 as the potential platform to replace their second device or go beyond the capabilities of their primary device.

Windows 365 is gaining some new features too and it certainly is transformative. A highly requested feature - Azure AD Join support for cloud PC is coming to general availability in May. We expect to see more details of this feature as it rolls out, but this is big news for organisations with a hybrid AD configuration.

It’s also important to point out Windows 365 Offline feature, supporting work in Windows 365 even when disconnected from an internet connection. When connectivity is restored, the cloud PC will automatically resync with the service without data loss, so your workflow and experience are persistent.

Overall, these are encouraging updates from Microsoft, who are listening to the end user to deliver the best products and services they can, supporting accessibility and boundary-less computing for a hybrid working reality.