Welcome to our September Tech Update.  As ever, Oliver Neville-Payne of our Presales Team rounds up the latest and greatest technology releases and corporate tech-news from the past month. 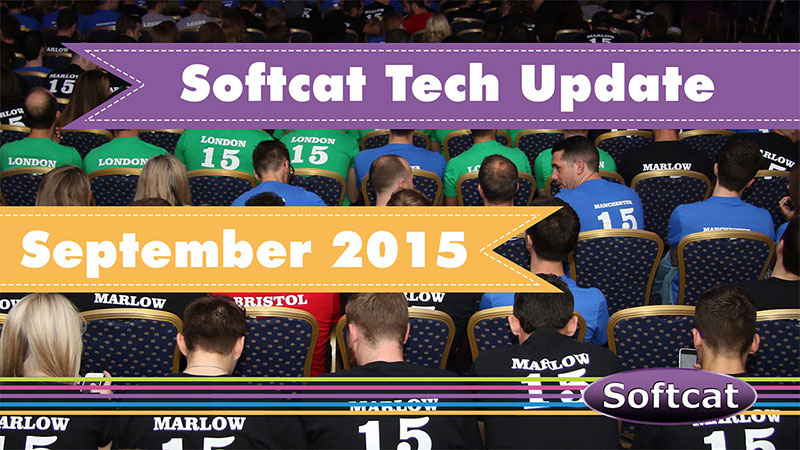 One month on and the Windows 10 news train is full steam ahead.  The head of the Windows and Devices group, Yusuf Mehdi reports that the OS is now running on 75 million devices globally, and is showing a faster uptake than any previous version of Windows.  It’s also been installed to 90’000 unique computer models, demonstrating impressive hardware flexibility.

Interestingly, Microsoft has also revealed that 1.5 million of the installations have been Windows 10 Enterprise, perhaps suggesting corporate users see early value in the new OS.  In fact, the first full month on the market reveals that Windows 10 has a 5% market share.  Of course, the uptake is in large part due to the accessibility of the OS as a free upgrade to many users and organisations with Software Assurance.  Nonetheless, the stats are exciting.

Microsoft has also made it possible to download the Windows 10 ISO file directly from its website so a fresh install of the OS can be made rather than following the mainstream upgrade steps.

Likewise, Windows 10 will also be shipping as a USB media pack.  The posting of a pre-order web page by Amazon confirmed industry rumours and is welcomed over old school DVD installs.

Finally, Microsoft, has also suggested that Windows 10 Mobile will be released some time during November.  Little more has been reported other than it is not yet code-complete, but will extend the Windows 10 ecosystem.

If you’re contemplating the move to Windows 10, take a look at our recent article ‘10for10’ on some of Windows 10’s best features.

A collaboration between Intel and Micron has resulted in a new type of non-volatile memory named 3D Xpoint (pronounced “cross point”).

The companies claim this is the biggest breakthrough in “mainstream” memory since the introduction of NAND flash in 1989. The memory, which is the first of numerous competing ‘Post-NAND’ technologies to go into production, is said to be 1000 times faster than NAND flash storage used in memory cards and Solid State Disk (SSD) and 1000 times more durable.

The 3D part of the name refers to how memory chips can be stacked, making for denser memory and storage environments.

3D Xpoint is an integral component in Intel’s new Optane memory architecture, which enables memory to be written at a cell level rather than in block arrays.  This means data can be accessed far quicker and more efficiently than traditional memory.

The applications for the memory are far reaching, from speeding up scientific research to more immersive video experience.  Similarly, the potential to contribute to more efficient data processing in the cloud and high-performance compute environments suggest this could be a major breakthrough.

Starts trending towards StoreVirtual and vCentre, refreshes lines with CS-250, and 3PAR all-flash launch with 8000 series

The hyper-converged infrastructure market is changing at lightning pace.  So much so, HP has chosen to stop selling its ConvergedSystem 200-HC EVO:RAIL product only 10 months after joining the cohort of manufacturers VMware had chosen to deploy the solution with.

HP cite that their customers are looking for a more open and flexible approach to hyper-converged solutions.  As such, HP is choosing to focus its efforts on a refreshed hyper-converged line-up that sees their new StoreVirtual CS-250 as the centre piece.  Beefed up specifications including a doubling of RAM, more powerful Haswell processors, inclusion of software disaster recovery and a price shift to compete with the likes of Nutanix, Simplivity and Pivot3.

In tandem, HP has also rebooted its 3PAR storage family with a complete refresh of its midrange systems. The new 3PAR 8000 series replaces the 3PAR 7000 series, arguably the backbone of HPs storage business.  The new family offers a 40% performance boost over its predecessors, largely due to new connectivity standards, more powerful processors, and the Gen5 ASIC first introduced earlier this year in the 20000 series of 3PAR arrays. They also claim to have cut latency by 44%, the product of doubling array bandwidth.

According to analysts Gartner and IDC, PC shipments are down 10% over the last quarter, compared to the same time period a year ago.

Looking back at last year, PC shipments were supported greatly by the XP-factor and the hardware migrations that followed.  The research also suggests with the run-up to Windows 10 launch manufacturers have controlled inventory, preparing new products accordingly for the arrival of the operating system, whilst customers have also, naturally been cautious in their buying decisions with this on the horizon.

With Windows 10 now shipping and the arrival of Skylake; Intel’s new, more efficient micro architecture, sales are expected to receive a boost.  After complications surrounding the Broadwell launch, Skylake makes some huge leaps forward around performance, power consumption and thermal requirements.  According to Intel, choosing Skylake will see two and a half times faster performance, three times longer battery life, and four times faster wake-up times over desktops that are five years or older.  The S-series SKUs targeted as desktop and value lines rather than at enthusiast markets look set to be an attractive choice for commercial buyers considering replacement or refresh.

The last month has seen some interesting developments in the world of VMware.

With the arrival of Windows 10, VMware recently showed off A2 ; a project to manage and deploy apps to Windows 10 devices.  Clearly, Microsoft has ambitions for businesses to adopt the OS on smartphones and tablets and not just their desktops, and have made a big push to enable this through the adoption of a unified code base.  More than ever, these devices need managing and securing, especially as they won’t always be company owned.  AirWatch has achieved wide acclaim in this space, so the step towards deploying and managing apps and securing content on Windows 10 devices is not huge.  The demonstration showed how quickly a suite of applications could be deployed to a device with next-to-no impact on the user.  Whilst no release date for the product has been shared, we’re keen to see how this will progress.

For those not familiar with VSAN, it’s basically a SAN without a SAN, using VMware software instead to aggregate direct-attached storage running on ESXi hosts.  VSAN is used in EVO:RAIL, VMware’s hyper-converged infrastructure appliance.

VMware’s recent announcement tells us that VSAN is now going to support faster flash hardware in the form of flash mounted in DIMM sockets and using NVMe, a new technology allowing for much greater SSD bandwith than from a traditional SAS or SATA bus.  This gets NAND memory as close to the CPU as possible, therefore speeding virtual machines’ execution.  This will deliver welcomed performance improvements for virtualised workloads and will help VSAN stand up to the demands of business critical environments.

Lucky residents of Huntingdon, Cambridgeshire recently became the first people in the UK to trial G.fast, a new type of ultrafast broadband technology.

The trial, which is being delivered by Openreach, will expose 2000 homes to the service, enabling speeds of up to 330 megabits per second (Mbps) – more than ten times the UK average.

Importantly, G.fast changes the way broadband is transmitted.  Instead of requiring FTTP, which involves running fibre all the way to the premises, G.fast need only be run to the existing distribution point or cabinet, then using traditional copper connections into the premises. This has been introduced in a similar way using VDSL and VDSL2, using fibre DSLAMs and running the remaining distance over traditional twisted pairs of copper, but G.Fast offers the potential for higher bandwidth than VDSL technologies, using some very clever science that I shan’t claim to understand. The bottom line of all this is that G.Fast offers the potential for very high bandwidth DSL connections without running fibre lines to individual premises.

The new approach should mean faster deployment of ultrafast broadband and reduce the cost of rollout across the UK.

Ultra-fast SSDs on the way

SK Hynix, the world’s second largest DRAM chip manufacturer recently announced that it will be building two new chip plants in South Korea.  The investment, said to be circa $64 billion is focussed on expanding 14nm chip production, with the plants scheduled for completion in 2024.

The plans will shake up the market, increasing competitiveness with rival memory and flash chip manufacturers Samsung and Intel, which should lead to lower prices for consumers and businesses alike, whilst also fuelling innovation in SSD solutions. This is an interesting time in the industry, with Samsung jumping 14nm and moving straight to a 12nm process node, and other players placing their bets on 3D NAND. Combined with disruptive research into Post-NAND technologies, such as 3D-Xpoint and memristor, the DRAM and NAND market is moving at a growing pace.

That’s it for this month’s tech update, don’t forget to read through our ‘10 for 10’ guide to Windows 10 and check out the rest of our posts on the softcat.com blog, or through our social
networks.

Please contact your Softcat account manager or email us here to discuss any of the topics or products covered this month.